Networking and a hierarchy of needs

Most people probably can see the benefits of business networking.  It’s a great way of getting to know other businesses, raising the profile of your brand and most importantly finding new opportunities for your business.

In fact, for 78% of startups, networking is vital to entrepreneurial success. The main reason is that, once we meet someone face to face we have automatically a higher chance of closing a deal with that person down the line. It’s all about building relationships and helping each other in business. Maybe it sounds a bit cliché, however, the reality is we need other people, especially in business. According to Maslow’s concept, every human has a hierarchy of needs:

How is that related to networking? One of the most important motivational aspects is the need of belonging, which means we need to feel like we belong to a community. We all want to feel appreciated and liked. That’s why one of the keys to a successful networking is to make others feel comfortable and respected. Don’t go to networking with a sales pitch. Go as yourself, talk to people and be genuinely interested in them. Don’t make it about yourself but about them. And listen! I know we’ve all experienced a conversation that just doesn’t flow but at least try. Even if it’s not your potential client, you’ll never know who that person knows and how they can impact your business in the future. (Ok, if it’s really bad, look for an exit strategy.)

Maslow’s research is probably slightly outdated by now (since his paper was published over 70 years ago) and although the basic concept stays the same, we could certainly add a few more needs to the pyramid. (I wonder who else thought of the WiFi!) However, jokes aside, I presume that one of the things that should be on that list is the need of being noticed. As humans, we naturally struggle when we’re excluded from the group. It makes us feel invisible, and it actually affects our self-esteem and well being. Have you ever been to a networking event when no one paid any attention to you? Do you remember how it felt? It’s like being back at a school dance and standing by the wall alone while everyone else is having a great time. That feeling changes as soon as someone walks up to you and starts the conversation. How can that help you in networking? Next time, when you go to an event, look for people who are their own or don’t seem very comfortable and simply go and introduce yourself. Noticing them will certainly go a long way. 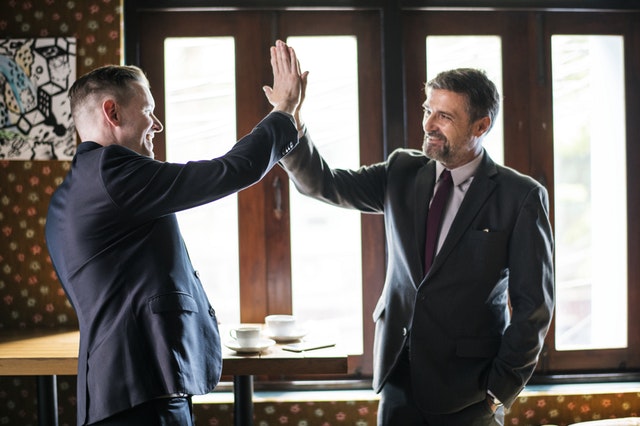 Did you know that calling someone’s name will automatically make you seen more likeable? Of course first, you need to make sure you remember people’s names which many people struggle with. When someone introduces themselves, repeat their name a few times in your head and perhaps try to associate it with something memorable.

Ok, we established one of the most critical aspects of successful networking is being likeable. Another crucial thing is the confidence. If you don’t have it, fake it. People like people who are confident and happy. There is one little trick that can help you boost your confidence: to smile. According to research, even “fake smiling” can improve your happiness and your confidence.

There is one thing, related to “the need for self-esteem” that a lot of people don’t do but they should: Setting a clear goal before going to the networking event. What exactly you want to achieve from the event? How many people do you plan to talk to? Is there anyone specific in the room you want to be introduced to? Achieving this goal means that you may have to do something outside your comfort zone. But don’t worry, that’s where all the magic happens. I assume for a lot of people going up to a group of strangers can be a bit daunting. (It’s not just you!) But believe me, once you’ve done it several times, it gets easier. Also having a clear goal will help you along the way because the motivation of achieving will be greater than your fear. And when that happens, you will feel fantastic.

We use cookies to ensure that we give you the best experience on our website. If you continue to use this site we will assume that you are happy with it.Ok